Generation Z, young men and women born starting in 1995, now make up 25% of population of the United States. To say that this group faces immense challenges in the years ahead understates the situation by several orders of gravity:  economies are undergoing rapid change; social media is fueling political polarization; the climate may be changing, possibly permanently cultural and religious diversity is increasing; and social mores continue to evolve.  These are but
a few of the societal summonses – hard, but also exciting – our young people will have to answer as they very soon assume leadership. With these realities in mind, Trinity’s history and social studies faculty are committed to preparing each graduate to meet these leadership challenges.  To that end, the history and social studies curriculum emphasizes the following: Historical and Cultural Literacy; Critical Thinking; Nonfiction Reading and Writing; and Citizenship 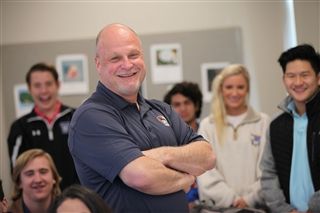 Mr. Klassen is certified by the TEA to teach Speech and Social Studies 7-12. Before joining Trinity in 2017, he practiced law for 26 years, including 13 years as the Chief of the United States Attorney's Office in Midland. He has tried more than 80 cases to a jury during his career and has served as an instructor at the National Advocacy Center in Columbia, South Carolina, on multiple occasions. He began Trinity's award-winning Speech and Debate Team in 2017. Mr. Klassen and his wife Stephanie have two daughters: Katherine, a sophomore at the University of Portland, and Mary, a senior at Midland High School.  In his spare time, he is a passionate fan of the Minnesota Twins and enjoys reading political biographies--the longer the better.