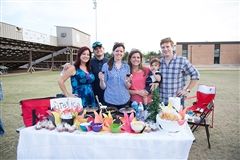 Dr. Sharmi Singh Watkins was a Trinity lifer, graduating as valedictorian in 1997. She made a perfect score on the Math section of the SAT. Dr. Watkins holds a Bachelor of Science in aeronautical and astronautical engineering from the Massachusetts Institute of Technology (MIT), and Doctor of Medicine and Master of Public Health degrees from the University of Texas Medical Branch (UTMB). Her residency training in internal medicine and aerospace medicine was completed at UTMB, where she also served as the Chief Resident of the Preventive Medicine Residency programs. She is a Diplomate of the American Board of Internal Medicine and the American Board of Preventive Medicine. Dr. Watkins has authored numerous technical publications on topics related to the delivery of medical care on long duration missions. She is a member of the MIT Educational Council and the Center for Space Medicine and is an Associate Fellow of the Aerospace Medical Association.
Prior to joining NASA in 2015, Dr. Watkins was a professor of Clinical Preventive Medicine and Internal Medicine at the University of Texas Medical Branch. At NASA, she has served in multiple roles, including lead scientist for the NASA Human Research Program (HRP) Exploration Medical Capability Element; HRP Program Clinician, Human Health and Performance subject matter expert for Commercial Crew Program and ISS-certified Flight Surgeon. Dr. Watkins is a Medical Officer serving as the Assistant Director for Exploration in the Human Health and Performance Directorate at the NASA Johnson Space Center. In this role, she coordinates and integrates the health and performance activities for NASA’s exploration efforts, including the Orion Program and the Lunar Orbital Platform - Gateway.

After graduating with his postdoctoral training from Scott and White, Dr. Roden returned to Midland, Texas and practiced emergency medicine. As well as practicing in rural West Texas along the border of Texas and Mexico, he developed his company - Texas Flying Doctors, and was an FAA aviation medical examiner practicing from his clinic on the family ranch while supporting the ranching community that utilized aircraft for operations.

During their remarks to Upper School students while visiting the Trinity campus , Dr. Roden and Dr. Watkins said they are grateful for their Trinity experience and the faculty’s high expectations for a strong work ethic, critical thinking skills, and, most of all, character development. “Without a doubt, we knew we were genuinely loved and cared about,” Watkins said. “To this day, I treasure my memories, relationships and experiences from my time as a Trinity student.
Back