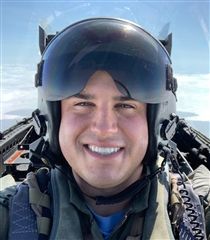 "I am very thankful for the foundation that Trinity provided."
“Growing up, Trinity School was a sanctuary. It was a place to practice leadership, cultivate my spirituality, develop dreams, and learn how to be a student. Most importantly, it was a place that allowed me to fail. The teachers and coaches were in-tune with and cared deeply for all the students. They would lift us up and encourage us to be our best selves. There is not a better school in Midland!”

Chris Compton attended Trinity School from 6th grade through high school. He was the recipient of the Trinity Award, the DAR Good Citizen Award, the Peck Wakefield Award, and the Doris Watson Scholarship. Chris enjoyed serving as a Prefect, a Chapel acolyte, and was engaged in student government. Chris played baseball was a track state champion in the 400m, and a captain on the ’06 state championship football team. He earned his Bachelor’s degree in Communication from Trinity University in San Antonio and would go on to earn a commission in the U.S. Navy. During his nine years in the military, Chris served as an Electronic Warfare Officer in the EA-18G Growler, was deployed multiple times to the Western Pacific Theater, and worked as a Tactics Instructor following graduation
from the rigorous Growler Tactics Instructor Course. Chris is currently pursuing his master’s degree in Business Administration from Texas A&M University and is married to a fellow Midlander, Kendall, and has a beautiful daughter, Lillian.

“I am very thankful for the foundation that Trinity provided. Looking back, it was not only an education, Trinity positively shaped my values and character as a young man. I carry those lessons with me every day.”
Back