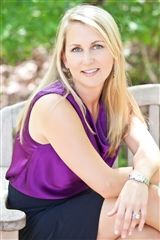 During her time at Trinity, she served on the Middle and Upper School Student Council, was a chapel prefect, a cheerleader and played on the basketball, tennis and volleyball teams. She was elected by her peers to the homecoming court both her 8th and 9th grade years. After 9th grade, Kristen attended the Lawrenceville School and then followed in her father’s footsteps to the University of Texas at Austin where she earned a Bachelor of Science in Advertising in 1999.

Upon graduation from UT, she followed her degree path and worked for a major advertising agency in Dallas on the Dell account but felt the pull to Fort Worth. She worked several more years in advertising at Concussion Advertising in Fort Worth on multiple local and national accounts.

In 2002, Kristen left the advertising world to help launch 95.9 The Ranch Radio station and created the 32 week Texas Music Series in downtown Fort Worth that is still going strong. This is where her love of event logistics was born. With the radio station in good hands, she took a more-than-full-time job with the Diabetes Association where she was solely responsible for five major events a year in the DFW market.

Personally feeling and witnessing staff burn out and high turnover across the non-profit sector, she realized a gap in event planning services. What if overworked non-profits had the option to hire an event planning company to cover the logistics so the staff could focus solely on the fundraising? With a leap, prayer and several years of event planning under her belt, Kristen launched K. Deweese Events in 2010 focusing on non-profit support, corporate and personal event planning.

K. Deweese Events client list includes the Susan G. Komen Foundation, Texas Wildlife Association Foundation, Black Dog Charities, the Stephen McDaniel Memorial Foundation, A Wish with Wings, The Bobby Bragan Youth Foundation, Cuisine for Healing, the Keller ISD Education Foundation, Cure Duchenne, among others. Twelve years in, she is most proud of her clients that have been with her since day one. Kristen  thrives on the logistics, creativity and the new and never before seen concepts that present themselves at every turn. Her heart for service and philanthropy shines through in the millions of dollars she has helped nonprofits organizations all over the country raise for their missions. She is the Past President of the Panther Club benefiting the Boys and Girls Club of Tarrant County and greatly values her relationships with non-profits in the DFW area.

In 2003, Kristen met her future husband, Jonathan Deweese. Although he attended graduate school at the University of Texas, Kristen and Jonathan feared the day he would meet her dad, Roy, and have to admit his lifelong loyalty to his undergrad alma mater, The University of Arkansas. As season ticket holders to both UT and Arkansas, contentious calendar planning in mid-August became a family affair for years to come.  Kristen & Jonathan were married in 2010, with her father’s consent, after Jonathan proved his worthiness by attending several dove season opening weekends in Balmorhea and tirelessly walking the sunflower fields drumming up the birds and cleaning their bags while Kristen and Roy enjoyed cold beverages. Jonathan’s interest and insightful questions about the oil & gas industry during the long, flat, West Texas drives was also a bonus in Roy’s mind.

In 2014, a few days before Christmas, Kristen and Jonathan welcomed their baby girl, Miles Kimsey Deweese, into the world. Miles, otherwise known as “Kristen’s Mini Me” around Trinity is in first grade at All Saints Episcopal School in Fort Worth and to her mother’s teary delight, receives the same birthday prayer that Trinity students hold so dear. This family of 3 enjoys spending weekends at Eagle Mountain Lake, fishing & traveling whenever possible, football in the fall, Colorado in August and nightly dance parties with their COVID rescue, Izzy.

Kristen has proudly served on the Trinity Alumni Advisory Board for 4 years and has helped facilitate the Fort Worth alumni gatherings since the inception of the “On the Road Tour” in 2014. Kristen has been a great resource in developing and growing the Alumni Association. A lot of where the association is today is because of Kristen lending her time, ideas and enthusiasm to Trinity School.
Back